This recipe come from the new Weight Watchers Power Foods cookbook's vegetarian chapter. I thought it looked interesting, and I had some kale to use up. Since I had all of the ingredients on hand for the most part, I decided to give it a try. I did substitute 1 tsp of turmeric for the 1/4 tsp of saffron threads it called for, based on a recommendation I found online to use 4 times as much turmeric when substituting for saffron. I also used smoked paprika -- the recipe calls for either smoked or regular paprika. I feel like the smoked paprika added a little bit more complexity to the flavor of the stew, so I would recommend using it. It has a bit of a lengthy cooking time and took almost an hour from start to finish, including prep time, but it was very good! I also served it with brown rice to round it out and add some whole grains to the meal. 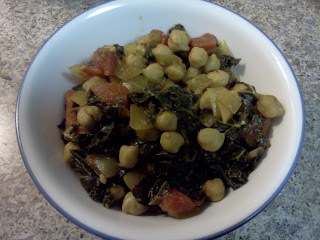 My name is Kari, and I am 29 years old. Through poor eating habits in my teenage and college years, I gained quite a bit of weight and lost it in 2011 with Weight Watchers. I started this blog to collect some of my favorite "on plan" recipes. In this blog's infancy, I was an omnivore, but transitioned to vegetarian in the late fall and am currently working on going vegan and consuming no animal products at all. I have also started a new vegan blog to chronicle my transition to veganism.